I think that a key point to make Linux even more popular is to make it as simple and user friendly as possible. However when I installed it for the first time I came across a not inconsiderable difficulty, support for hybrid graphics cards.

In fact, the autonomy of my laptop was really bad and the temperatures were constantly critical. This forced me to use almost only Windows, where I had an efficient energy management. To solve this problem I really tried a lot of ways, until finally I found the solution to my problems in acpi_call. Thanks to this kernel module I could disable the dedicated GPU of my laptop, so I could have autonomy and temperatures comparable with those produced by Windows. However, I found it too complicated to install and use, it was definitely not suitable for users who entered for the first time the Linux world, so I tried to simplify it. 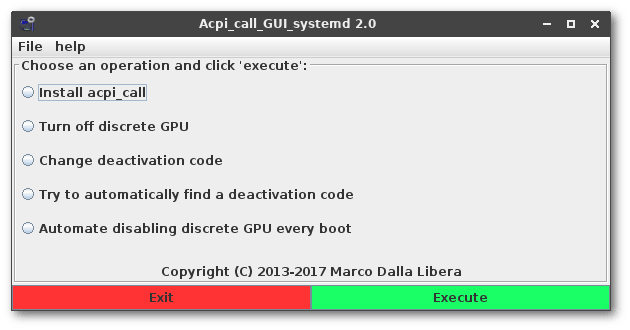 I created a complete graphical interface to make it easier to install and automate. You can find links to the projects below, currently the most supported version is the one for systemd:

this below is a list of the forums and wikis which I have contributed to over the years:

This site does not use cookies or tracking elements, you can surf without worries